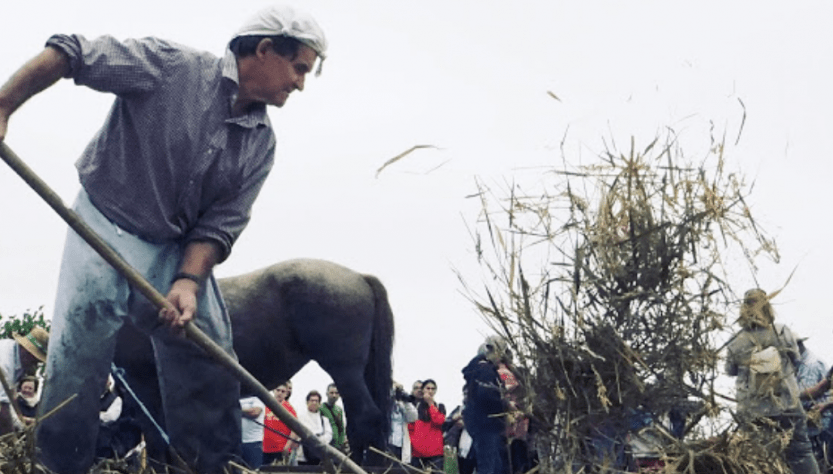 On Thursday night we arrived at Camping Ametlla where they treated us like kings at dinner and we slept in bungalows.

The next day, a few of us got up early to watch the sunrise from the beautiful coves nearby. A rocky spot with beautiful views.We arrived at the Ametlla de Mar , where representatives of our tourism office met us, had breakfast, and then we made a guided tour of the town, admiring its port, its streets of the sea district and part of the road that runs through some of its Coves and beaches.

As the sea was not to sail and to go swimming with the bluefin tuna, we went to the catamaran of Tuna Tour of the Balfegó Group where they explained to us their system of sustainable fishing, fishing by fencing, that allows to capture the best specimens when they are Adults, and in turn continue allowing the reproduction ensuring the perpetuity of the species. At the end we were able to taste bluefin tataki which was delicious.

In the afternoon we went to El Perelló and visited the facilities of Mel Múriawhere they explained the history of the company, the life of the bees and their hierarchical structure and how they obtain the different products they sell. To finish the visit, we put on protective suits and visited some of their beehives, it was a very enjoyable and fun experience.

At sunset we arrived in Xerta, where some were housed in the 3 * Hotel Casa Ceremines , a beautiful and carefully decorated 16th century building, with very large rooms with high ceilings, beautiful, and others in the 5 * Villa Retiro, With a spectacular garden area and rooms of elegant rustic decor, and a restaurant with a Michelin star where we had dinner afterwards.

In the restaurant formerly known as Torreó de l’Indià, chef Fran López surprised us with a special pairing menu for the occasion, a combination between his tasting menu and the homage menu.We were attended at all times by maitre and sommelier Javier Campo, explaining at each moment the choice of each wine according to the dish. It was a wonderful experience for all the senses hard to forget 😉

On Saturday it dawned gray, but all with the illusion of our next destination Horta de Sant Joan, town that discovered Picasso, and as we were told in the Centerthat bears his name, was the cradle of cubism, we could see, works and sketches Previous to the works that everyone remembers. We toured its beautiful streets, stone houses in which time seemed to have stopped. Of how well maintained they are.

We took a bicycles from MontSport and made the route of the greenway between Horta and Pinell de Brai (about 20km). A track that runs along the old railway, through bridges, tunnels and a beautiful landscape. Halfway we stopped to admire the Sanctuary of the Fontcalda , natural rocky set, known for its hot springs that left us impressed.

Already in Pinell de Brai, we went to visit the Cathedral of the Vi, an old coperativista winery that now belongs to Pagos de Híbera . A modernist construction realized in 1922 by a disciple of Gaudí, César Martinell. We did a guided tour of its magnificent interior, to end up tasting some of its wines and then eating in its spacious restaurant.

After lunch, we approached Miravet , where we were guided through the Templar castle, a fortification that crowns the town, which was taken from the origins of the Almoravid monks by Count Berenguer IV and the Templar monks.And then they reinforced it.A place with magnificent views of the Ebro River passing through this town.

In the afternoon we arrive to Tortosa to see its gothic cathedral, a wonderful building reflecting all the cultures that have passed through the city from Rome to its baroque façade.Remarkable are his permanent exhibition, the cloister, the basement with the lapidary and the different objects, altarpieces and figures that we can find of Christian iconography.Afterwards we were taken to visit the Royal Colleges , a Renaissance complex of great value. An important place that formed theologians from all over, it makes Tortosa one of the most important cities of Catalonia of the sixteenth century.

Sunday would be the day of farewells, but not less intense.

To begin with we went to the Platja del Trabucador, one of my favorite spots for sunsets that I had never visited at such an early hour.

Then we went to L’Estany , a well known restaurant in the delta. Where we could attend the XXV Feast of the Mowing of rice. First came the traditional carriages, then began the harvest in the old fashion, and finally the horse made the beat to separate the grain from the straw.

All this accompanied by very lively jotas.While we were performing one of the formations of the Xaranga Suc d’Anguila with ” Guardet the singer and his rondalla” whose ability is to improvisar jotas sung accompanied by the typical variations of the rondallas.

What was our surprise when we were dedicating one to one different jotas, which made us very excited 🙂

Before we left the owner of the Estany gave us an aperitif with typical products of the area that I love as torradeta d’anguila, sea nettles, etc …

At noon we arrived at the port of Sant Carles de la Ràpita and took a boat that took us to Musclarium , a mussel in the Bay of Alfaques with a restaurant where we could taste magnificent oysters and mussels in the middle of the sea, with breathtaking views.

After eating in the port of Sant Carles, we left with the joy of having lived three days very intense but precious.Many thanks to @pinapli and @ rhesc for having conceived this trip and made us part of it and many thanks to @ afolch of the Diputació de Tarragona Terres de l’Ebre for having believed in the project and to carry it out.