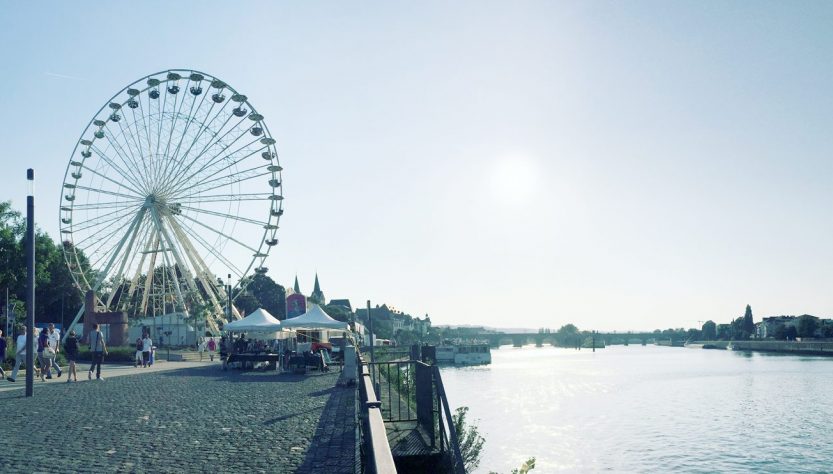 In the middle of July @thomas_k and @ uwa2000 contacted me to invite me to participate in a 4 day tour of + germanytourism and I delighted said yes, because those who know me know that I enjoy events related to tourism promotion .

We all met at the airport in Frankfurt and from there we went by minibus to Koblenz , a beautiful city where the Rhine and Mosel rivers converge. There we were received representatives of tourism of the city and we climbed with the cable car until the Castle Ehrenbreitstein , whose breathtaking views surprised us.

In the morning we went to Lahnstein , where the city’s tourism representatives offered us a cocktail in a historic Historische Wirtshaus pub and a guided tour of the points of interest. We were also taking a walk on the banks of the Lahn River, a landscape where a bright green predominated and everything very clean.

After lunch at Maximilians Brauwiesen, we strolled along the banks of the Rihn , to relax before returning to the hotel, because the night was going to be busy.The most important Rhine in Flames event.

At dusk we arrive in Koblenz , the whole city dresses up in celebration waiting for the big event, while the streets near the river are full of people eating and drinking.
We went to visit the Deutsche Eck(German corner) point where the two rivers converge and where at the end of the 19th century a monument was erected in honor of William I of Germany.

We finally settled on the Pfaffendorfbridge, where we saw more than 50 boats coming up the river full of people celebrating parties. The concept of the party, is that for each population that pass the boats, they stop and the population greets them with a pyrotechnic castle .
Before they arrived, we saw the fireworks from afar, and the rumor of all the boats was ever closer, impressive and unforgettable.

Once they arrived in Koblenz and all the boats were located between the Ehrenbreitstein Castle and the Deutsche Eck, from the top of the castle began the impressive pyrotechnic spectacle.

At noon we made an excursion through some beautiful forests until we reached the magnificent castle of Eltz . A building with more than 900 years of history, that we could admire from different points and always impressive.

In the afternoon we reach Cochem , a village on the banks of the Mosel , its unmistakable profile with its imperial castle and the charm of its old town. If you add to that the tranquility that was breathed, people walking, or watching the sunset from their boats, a moment of indescribable peace.

Early we were in Prinzenkopfturm , from a viewpoint of five floors of height we could observe a meander of the river Mosel. The path to reach was also amazing, slopes of the mountains in Bremm of great slope covered with vineyards to the right and the Mosel to the left.

We were taken to Trier , considered the oldest city in Germany because its history dates back to Roman times. We did a guided tour accompanied by a tourist representative of the city. Impressive the Porta Nigra , that would come to be like the door of entrance in the antiquity.

We spent the afternoon visiting the vineyards of Weingut Deutschherrenhofand also got to taste their wines very good.

At night, it was my last supper with the group, and soon my train departed. On the way back to Tarragona I remembered with emotion the good moments lived, and taking in my heart a bit of each of my companions forever  😉 <3