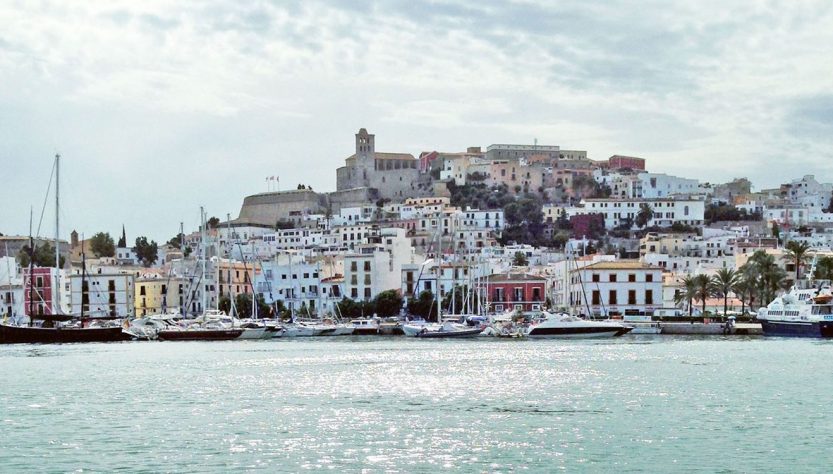 Thanks to Cafe Lavazza in collaboration with the local Café Mambo Ibiza , I was lucky enough to win a contest #osolemio on instagram, whose prize was to spend a weekend on the island and dine at the legendary Café Mambo located in Sant Antoni de Portmany.

At 12 o’clock our first destination, the hotel where we would stay courtesy of Lavazza , The Hotel Pacha de Ibiza from the first moment captivated us by its minimalist, elegant decoration, with predominance of white ( not in vain are we the “White Island”).

Once installed, we went to Santa Eulària (16 km northeast of Ibiza) and toured its promenade along the seashore. 5 km to the south (and within the municipality of Santa Eulària) we arrive at Cala Llonga, with a beach of fine sand, animated with live musical performances in the chiringuito. But I was captivated by the wooden pier and the shape of the cove and the intensity of the color of the water.

A little further south we admire the views from the cliff of Sol d’en Serra.

In the afternoon before going to Sant Antoni, we traveled some roads to admire the island of Es Vedrà and a little further north the Isla de Sa Conillera.

We arrived at Sant Antoni around 6:45 pm. There was still a little bit of nightfall, enough to take pictures of the place, Café Mambo, its restaurant, with live dj, its steps at the foot of the rocks to admire the mythical sunsets of Ibiza . A thousand details to capture in such a short time, a magical place. We did not have a very spectacular sunset, but no less special for us.

We saw dusk enjoying part of our award, dinner from a table at the front line, which was the closing night of the Mambo Cafeof the 2014 season. On the menu all kinds of delights to try, creative dishes, in combination of other more traditional Mediterranean cuisine and other hospitalizations to keep the public happy that comes every season to this place. A pleasure for all the senses.

The next day we got up early, at 7 to get to the south of the island, to the beach of Es Cavallet, next to Ses Salines, from there we saw the sunrise, then the sun went higher, we went to Ses Salines, a beach beautiful and very well cared for, with an unreal color, with all the luxury features for a perfect stay. The sun rose, while I admired the gulls, and yachts anchored near the shore.

After having breakfast at the hotel and doing the chek out, we took a walk through the port until we reached the Botafoc lighthouse, and to be able to walk around it, admire the sea and enjoy the profile of Dalt Vila (old town of Ibiza) .

The culmination of the day and of our stay was, getting lost in the old town, enjoying its white houses, the walled enclosure, the canyons that defended the old fortress and the band and band views of the city, on the one hand marina and the commercial port, on the other as the coast and different islets that decorate it.

I am already looking forward to returning, to travel more calmly all its streets and to know the different coves that many of you have recommended to me.

Many thanks again to Lavazza coffee and Café Mambo Ibiza for allowing me to enjoy such a special and hard to forget prize.